In July of 2018 Phil Rice, our VP of Ministry Expansion, and I (Randy Smith) flew to Addis Ababa to teach the first two of ten courses in our new Youth Ministry master’s degree program with our partnering Institution. The Evangelical Theological College (ETC) in Addis Ababa, Ethiopia is one of the many ministry training schools of the Kale Heywet Evangelical Church Denomination. The denomination has over 10 million members in more than 10,000 churches.

Sixteen students originally signed up for the school’s, and the country’s, first MA in youth ministry. After three years of hard work, including being in a global pandemic, 13 students finally graduated. I had intended to be there to present the diplomas and speak at the graduation, but the pandemic and the country’s national elections prevented me from securing a visa. I had to attend the graduation by live streaming. I am so proud of these students! We already have two more MA level student groups matriculating through the program with hopes of graduating in the next year or two (more than 25 students).

The goal and priority of the Youth Ministry MA program was to initiate new BA and Diploma youth ministry training programs throughout dozens of the denomination’s undergraduate schools over the next few years. We are well on the way toward accomplishing that goal! This will prayerfully lead to hundreds of new theologically trained youth leaders serving in thousands of churches, reaching millions of youth in Ethiopia.

The Awarding of Diplomas

According to religious demographics, only 1 out of 5 (20%) of Ethiopia’s current population are evangelical Christians. Ethiopia needs a Great Commission Youth Movement! YMI, along with our new ETC Graduates, are planning on accomplishing just that! Please celebrate. And please pray with us for the training of more youth leaders in Ethiopia – and all of Africa!

(Note: in 2019 YMI graduated 22 Youth Ministry Students at the Nigerian Baptist Theological Seminary in Nigeria, the #1 most populated country in Africa with more than 212 million.) 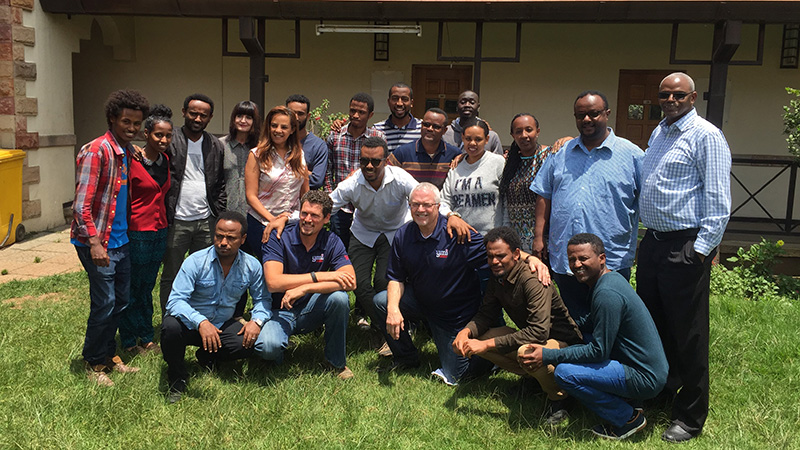 Thanks for all your support!
Dr. Randy Smith
President, YMI

Updates from Our Trainers

Due to changes at YMI I have taken on the responsibilities of Office Manager and Interim Mexico Director. This Quarter I was able to travel with our President, Dr. Randy Smith, to Mexico City where we appointed a new Mexico CYM Director. It was great to get on the road again and minister overseas. Sadly, my trip to Ethiopia in July was canceled due to national unrest. A definite highlight was our Gathering of all USA-based trainers in Louisville in June.

It has been a season of travel and re-connection as we have met with family members, friends, ministry partners, churches, and the YMI team and leadership. God has been faithful to provide financial support, relationships and encouragement along the way. We hope to finish well here in the US and be as healthy and equipped as possible to return to Romania.

We are ready to go home to Ukraine and restart our life and ministry. Vasya Ostryi has done a wonderful job in our absence, and we have six new youth ministry graduates from Kyiv Theological Seminary. God has provided our financial support during furlough, and we are so grateful for the love shown to us from our partners in ministry and our YMI family. We fly out on July 27th and covet prayers for the transition. 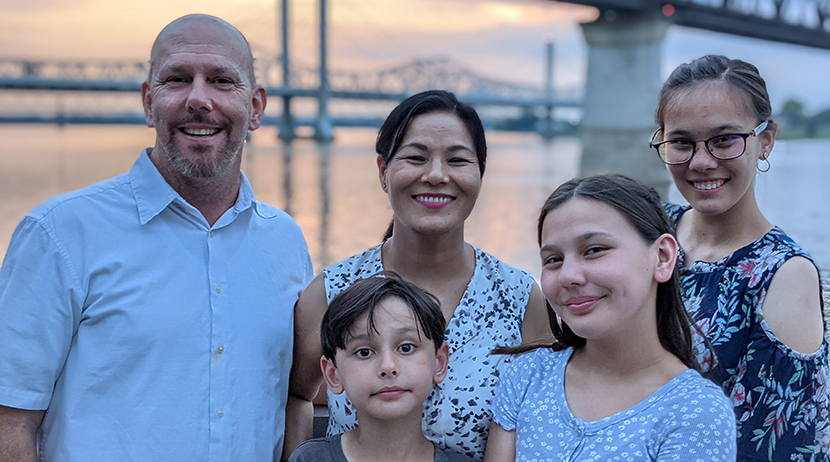 Contextualization is key to long-term success of any missions-based training program. On July 5th I passed the oral defense of my doctoral dissertation! My hope is that I will be able to apply insight from my research with a team of locals to further contextualize our curriculum. The bottom line for our training programs – youth ministry training taught in the local context by local youth ministry leaders!

As Karen and I continue to meet with our team for missionary care, it is truly a joy for us to minister to our YMI team who are committed to growing and maturing in their personal relationships with Jesus. They are committed to seeing young people all over the world come to faith in Jesus, be discipled, and then committed to seeing their own children grow and mature in their relationships with Jesus. Praise the Lord for the team of missionaries that God has assembled to be a part of our YMI Family.


A graduation ceremony was held on May 29, 2021 for graduates of the Kyiv Theological Seminary. We now have six new graduates in that Youth Ministry program. Thank God! We have also started a new partnership with the Vinnytsia Seminary of the Bible Exposition for the training of youth ministers. In September we resume the annual Youth Ministry program at Kharkiv Bible College. Please pray for us!

Reconnecting in person at this year’s YMI Gathering was a tremendous joy for our family! Caleb said it was great to reconnect in person, because meeting online isn’t deep enough for people who need to do things together to connect. Brady said the Louisville gathering was immensely helpful in realizing how important it is to reconnect in person after the long absence of interpersonal “3D” relationships. Our family was so refreshed to be together with our YMI family as we shared stories and had immediate understanding of the struggles we faced while living overseas during the pandemic. It was exactly what we all needed.

You can be in touch with the Rice family at phil@ymitraining.com

Cori Beth and I (Joe) had the joy of hosting our YMI Family Gathering event in Louisville for all our missionaries who could attend. We had a great time of fellowship among our team. Since Asia remains closed due to Covid restrictions, we are relocating to the Los Angeles area to serve alongside the Kaptain Family in an interim ministry until Asia re-opens.

Every two years YMI hosts what we call a “Ministry-wide Summit”. These Summits are powerful tools for creating unity keeping our YMI family connected. The summits keep our trainers on the same page and focused on our ministry goals and can also help recruit new members to the team. Sonnet and I made the decision to join YMI after attending the last Summit, which was in 2018 in England.

Yes, I know I said they were held every two years, but you know what happened last year… Covid kept us from having our regularly scheduled Summit in 2020, and even the planned “make-up” Summit in 2021. With the Summit pushed out even further to 2022, YMI realized that we needed to do something to maintain team unity and focus.

Since every American trainer was already planning to be in the States this summer, we decided to have a mini-summit of sorts, something we called “The Gathering”. The Gathering was shorter, less intense, and hosted right here in Louisville, KY. The Grom family, our newest trainers who will be heading to Malaysia soon, stepped up to organize this 2021 YMI Family Gathering.

Although it was not an “official” Summit, The Gathering was just what our team needed. This was even more so for the kids of YMI. In many ways, our YMI kids, while living across the world, are closer to other YMI kids than their own cousins. This experience is due in large part because of something called “third culture kids”. Being a missionary kid, or what we in the business call “MKs”, is a tough job. They grow up in a culture that is not their own. Oftentimes, when they return to the States they don’t feel like they fit in because they did not grow up in this culture. So, these kids are called Third Culture Kids (TCK) – a culture between the one they live in and the one they left.

When our YMI kids get together as TCKs they feel understood because they are with kids that share the same issues and problems of growing up in a third culture. In many ways, our Summits and The Gathering are more beneficial to them than they are to the adults. Here is what our YMI kids had to say about The Gathering. My heart was tugged by the words of Brady and Anjali. 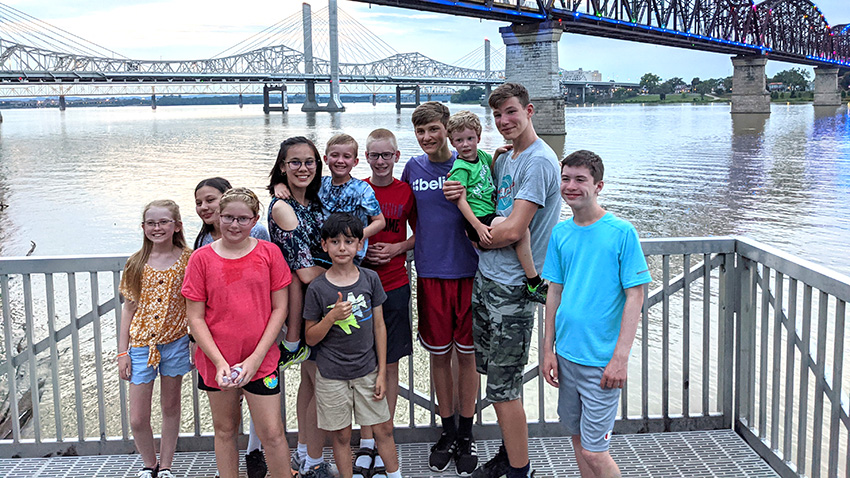 “All my life I have been moving from one place to another. Growing up as a third-culture kid was the only life I knew. You live many experiences as a TCK that other people in the world simply will not understand. For example, I have had the incredible opportunity to meet many people from around the world. I have made many friends from my many moves – friendships I do not regret having.

“Yet every time I moved and made a new friend, I had to leave and say goodbye. It started to seem like every five years I had to say goodbye. I began feeling distant from everyone. Friendships slowly started drifting, and I slowly started closing off. A dark cloud had begun to form around my social life. Each possibility of a new friendship was met with the immediate crushed hope that whoever I was trying to connect with was abruptly going to leave.

“After a year of failed connections and friendships I came to the summit hoping to connect one last time before I had to say goodbye to yet another group of friends. However, what I experienced was a completely different story.

“For three years I had only the past memories of us playing in green fields together but never actually having a real connection. Coming to the summit, I was allowed to be a kid again and experience human connection without worrying about being judged. I could finally just play. These people understood me. And though we eventually had to say goodbye, it was not so much of a goodbye this time as it was “let’s wait until we see each other again. For surely, we will see each other again.”

“Honestly, that was a nice break from everything. This time I have kept in touch with everyone, and in doing so, I learned something valuable: Though I am always going to be moving around, and friends will come and go, it is important to have a core group of friends that I will never have to say goodbye to. For me, that group of friends is my YMI family.”

“It was great to reconnect in person, because meeting online isn’t deep enough for people who need to do things together to connect.”

“The Louisville Gathering was immensely helpful in realizing how important it is to reconnect in person after the long absence of interpersonal “3D” relationships.”

“I thoroughly enjoyed the time I got to have with Brady, Caleb, Jarret, Evy, Anjali, Alina and Ethan doing go-karts, laser tag, escape room, Kentucky Kingdom and just all in all reconnecting with them. My favorite part was just being able to see how well everyone was doing.”